When an unlikely partnership was formed in Philadelphia in 1974 between an NFL team, a children's hospital and a restaurant chain, none of its members could have imagined that their dream of a home away from home for families of seriously ill children would grow to become an international phenomenon. 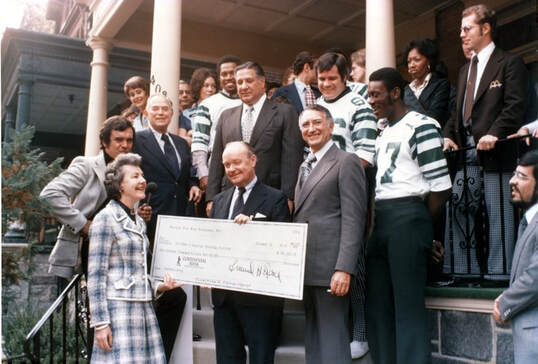 They simply wanted to create a place where parents of sick children could be with others who understood each others' situations and provide emotional support. The seeds of the partnership were planted when Kim Hill, the 3-year-old daughter of Philadelphia Eagles tight end Fred Hill, was diagnosed with leukemia. Hill and his wife camped out on hospital chairs and benches, ate food from vending machines and did all they could to keep Kim from seeing their sadness, exhaustion and frustration.

All around them, the Hills saw other parents doing exactly the same thing. They learned that many of the families had traveled great distances to bring their children to the medical facility; but the high cost of hotel rooms was prohibitive. They continued to think, "There has to be a happy medium." Hill rallied the support of his teammates to raise funds to help other families experiencing the same emotional and financial traumas as his own. Through the Philadelphia Eagles' general manager, Jim Murray, the team offered its support to Dr. Audrey Evans, head of the pediatric oncology unit at Children's Hospital of Philadelphia. It was Dr. Evans' dream for a house that could serve as temporary residence for families of children being treated at her hospital that led to the first Ronald McDonald House. The McDonald's owner/operators in Philadelphia made the House possible, donating proceeds from the sale of shamrock shakes. Eventually, Ronald McDonald House Charities was officially established in memory of McDonald's founder Ray Kroc, a strong advocate for children.

Currently, there are more than 365 Ronald McDonald Houses in more than 43 countries and regions.

In 2000, the Ronald McDonald Care Mobile was introduced offering cost-effective medical, dental and health education services to underserved children. With 53 Care Mobiles in 10 countries, the missions of mobile units are making a positive impact on children in their own neighborhoods. 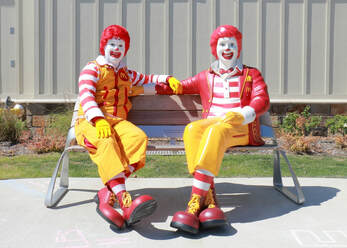 McDonald's has been the RMHC Founding Mission Partner since 1974.

McDonald’s support extends from monetary contributions and volunteerism, to cause related marketing promotions and the space to place RMHC Donation Boxes that raise money for local chapters, including Ronald McDonald House Charities of Arkansas. McDonald’s has helped RMHCA positively impact thousands of children and their families, and continues to provide valuable resources and support to help us expand our core programs and services.

In 1981, the Ronald McDonald House opened its doors and its heart to care for families with seriously ill children hospitalized at Arkansas Children's Hospital, UAMS and Baptist Health Medical Center in Little Rock. The eight-bedroom House provided a much needed respite for families after spending long hours with their critically ill children and helped ease some of their financial burdens. The House was then added on over time, bringing the total rooms to 28.

In November of 2016, after years of planning and hard work, construction was completed on a new House to replace the old one. It is a only a block away from Arkansas Children's Hospital. It is 32,000 SF, which is three times the size of the old house. It has 32 suites, a huge kitchen and dining area and lots of recreation areas for families and children.

​In January of 2020, the Ronald McDonald Family Room at UAMS opened in the heart of the hospital's NICU floor. Here families find  a comfortable, welcoming place to rest and regroup in the hospital, steps away from their baby's room. In addition to four sleeping rooms, where families can stay together, all NICU families visiting will find a hot cup of coffee, snacks, young sibling play area, laundry facilities, shower, comfortable seating and TV area, internet access, and the friendly faces of our caring staff and volunteers.
​
We are grateful for everyone who has supported the organization over the years.